The CX Debate Team is back to back state champions!!! 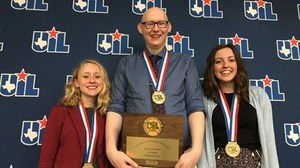 The CX Debate Team is back to back state champions!!!
The Mildred High School CX Debate team, comprised of Rowan MacLeod (Sr.) and Paige Jennings (Jr.), returned from Austin over Spring Break with another state championship.
Last year, MacLeod and Jennings won the 3A UIL State CX Debate tournament. In 2016, they were the bronze medalists. This year, they returned to the state meet and went undefeated to defend their crown. Also, Jennings was awarded the 5th Top Speaker Award and MacLeod was award the Bronze Gavel Top Speaker Award.
CX debate is a form of team debate in which students all across the country debate the same topic throughout the school year. The 2017-2018 topic was Resolved: The United States federal government should substantially increase funding and/or regulation in elementary and/or secondary schools in the United States. Debaters research and compile evidence to back up both sides of the topic. The amount of research debaters do to prepare is equivalent to that of a graduate thesis. Debaters use the compiled evidence to make arguments supporting their position on the topic. In a debate round, each team must verbally present their arguments to a judge. The judge decides which team did the better job of debating.
Sixty-four teams advance to the State UIL CX Meet in Class AAA. Each team debates 4 rounds and the top 16 teams advance to the second day of competition. Those 16 are seeded and compete in a single elimination bracket. Mildred’s team was seeded 1st and continued to stay at the top of the bracket all the way to finals. They debated teams from Yoakum, New Boston, Alpine, Friona, Banquete, Buffalo, Grandview, and New London. Speaker awards are also given out according to points awarded by the judges.
Earlier in the year, MacLeod and Jennings also advanced to the National Debate Tournament of the National Speech and Debate Association that will be held this summer in Ft. Lauderdale, Florida. They also were ranked 40th at the Texas Forensics Association (TFA) State tournament, which was an astounding feat. Schools in TFA are not separated according to the size of the school. All schools compete against each other, including private schools. Mildred was the smallest school represented in the top 40 teams.
MacLeod and Jennings are coached by Jamey Pritchett. Over the past 7 years, Pritchett has coached 6 state finalists and 17 state medalists in Speech and Debate events. His team won the State Speech Team Championship in 2016 and were the 2nd Place State Speech Team